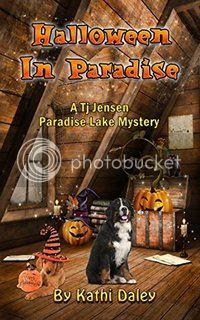 Synopsis: In the midst of the annual Halloween frenzy, Tj finds herself pulled into a series of events that occur at the high school where she works. She not only must help one of her girls deal with the increasingly popular pastime of cyber bullying, but she must help a student who has recently suffered a personal tragedy. And if Tj wasn't busy enough, in walks Samantha Colton, a reporter for Second Look; a television series which takes a second look at unsolved murder cases. The case that Ms. Colton is in town to investigate is the death of a popular student after the homecoming dance ten years prior. To make matters worse, or maybe more convenient, the graduating class Holly was part of is in town for the ten year reunion of their own homecoming. In other words, all the suspects in Holly's murder, just happen to have converged on Serenity for the weekend. When Samantha turns up dead Tj realizes that someone has a secret they don't want revealed.

Review: This is the first book I've read in this series, and I had no idea what I was missing. I have added all but one of the other five books to my Kindle this weekend so that I can catch up. I have to admit to favoring this series over the Zoe Donovan series, based solely on this one book.
Not only is TJ trying to get her younger sisters ready for trick or treating, she is also preparing for Homecoming at the high school, as well as her class reunion. As if that weren't enough, an investigative reporter for a "cold case" television show comes to town looking into a murder that took place during Homecoming Weekend when TJ was a senior. And as if all that weren't enough, TJ has to deal with bullying/cyberbullying taking place among her soccer team girls.Things really heat up when the reporter, Samantha Colton, dies in a car wreck which may or may not have been an accident. TJ starts to look at nearly all of her friends from high school as possible suspects, so she and her boyfriend, Hunter, along with a few other friends, start their own investigation.It turns out that everyone has secrets they have been keeping all these years, and possible motives for murder. The twists and turns will keep you guessing, and the family interaction interspersed with the mystery is endearing.Already looking forward to book 7!

Posted by Teresa Kander at 9:52 AM

For every review I read about this book, I want to read it more than I did before! *ARGH* :O)

The story sounds awesome. Glad you're going to get a chance to catch up on the series.
@dino0726 from
FictionZeal - Impartial, Straightforward Fiction Book Reviews