SPOTLIGHT AND GIVEAWAY: The Island, by Clarissa Johal

“Exploring a remote island can sometimes get you into trouble.
Especially when you stumble upon a cave and awaken two demons.” 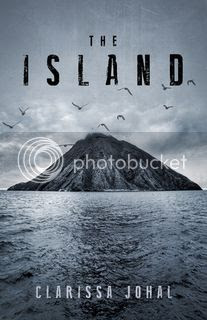 Emma Keller’s estranged grandmother has been missing for seven years. Emma journeys to her grandmother’s private island with the task of readying it for sale. Local rumors say it’s cursed, but she dismisses them as superstition. While there, she unearths a hidden cave, and is visited by two men soon after. Itu is well-spoken, though he hides his face in shadow. The other is more of a worry; with skin of alabaster, Thim’s feral presence sets her on edge. Emma discovers the island has a dark past. The two men aren’t human, but awakened demons…and they have their sights set on her. 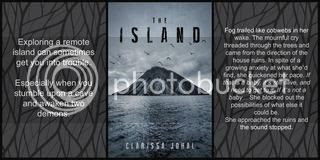 Excerpt from THE ISLAND:

She was jarred awake by a cry. The vestiges of her nightmare dissipated as she orientated herself. Nightmare. Emma let out a sigh of relief. The cry sounded again. A distant sound, high and wailing. A baby’s cry. Her heart quickened. Good god, surely that can’t be a baby?
The fire in the stove had burned down, its embers lending a glow to the living room. Emma looked out the front window. The yard was still. She unlocked the door and opened it a crack. The cry drifted in with the breeze, faint but unmistakable. She ran through her mind what possible bird or animal could make the sound and came up with nothing. Characteristically, the island was blanketed with silence, almost like a vacuum. She stood, uncertain. After several minutes, the sound started again—the unmistakable high wail of a baby. She slipped on her boots and parka.
Fog trailed like cobwebs in her wake. The mournful cry threaded through the trees and came from the direction of the house ruins. In spite of a growing anxiety at what she’d find, she quickened her pace. If that is a baby, it’s still alive, and I need to get to it. If it’s not a baby… She blocked out the possibilities of what else it could be.
She approached the ruins and the sound stopped. Her heart raced. I know it was coming from here. The area held an unnatural heaviness. A branch cracked behind her and she turned with a start. Something dark darted through the trees.
“Hello?” Her voice sounded muffled in the fog. Emma’s attention snapped to the left. The dark figure ducked out of sight. She took one step backward, and fled.
Heavy footsteps echoed from behind as she plunged through the trees. They were catching up with her. Emma pushed herself to run faster, terrified she’d lose her footing on the uneven ground. The cabin loomed large, a haven in the thick fog. Stumbling across the cabin’s porch, she hurdled through the door and slammed it shut, locking it.
Emma rooted her feet to keep from running around in circles. Straining to hear, she was greeted with eerie silence. Several moments passed before the baby’s cry started again. And this time, it sounded from right outside the door.
*** 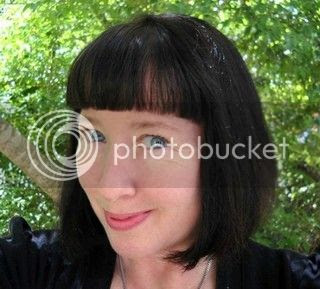 Clarissa Johal is the author of paranormal novels, THE ISLAND, VOICES, STRUCK, and BETWEEN. When she’s not listening to the ghosts in her head, she’s dancing, taking pictures of gargoyles, or swinging from a trapeze. She shares her life with her husband, two daughters, and every stray animal that darkens their doorstep.

THE ISLAND
Coming August 5, 2015 from Booktrope

THE GIVEAWAY
Enter the Rafflecopter to WIN a free ebook of THE ISLAND (PDF, mobi or ePub) and this bell necklace--similar to the one worn by the character of Nathanial Dumont.

Contest ends on August 21st. There will be two winners.

Thank you for hosting me in your blog!

I strive for curious ;) Thanks for stopping by, Diane!