And When She Was Good, by Laura Lippman

Synopsis: When Hector Lewis told his daughter that she had a nothing face, it was just another bit of tossed-off cruelty from a man who specialized in harsh words and harsher deeds. But twenty years later, Heloise considers it a blessing to be a person who knows how to avoid attention. In the comfortable suburb where she lives, she's just a mom, the youngish widow with a forgettable job who somehow never misses a soccer game or a school play. In the state capitol, she's the redheaded lobbyist with a good cause and a mediocre track record.
But in discreet hotel rooms throughout the area, she's the woman of your dreams—if you can afford her hourly fee.
For more than a decade, Heloise has believed she is safe. She has created a rigidly compartmentalized life, maintaining no real friendships, trusting few confidantes. Only now her secret life, a life she was forced to build after the legitimate world turned its back on her, is under siege. Her once oblivious accountant is asking loaded questions. Her longtime protector is hinting at new, mysterious dangers. Her employees can't be trusted. One county over, another so-called suburban madam has been found dead in her car, a suicide. Or is it?
Nothing is as it seems as Heloise faces a midlife crisis with much higher stakes than most will ever know.
And then she learns that her son's father might be released from prison, which is problematic because he doesn't know he has a son. The killer and former pimp also doesn't realize that he's serving a life sentence because Heloise betrayed him. But he's clearly beginning to suspect that Heloise has been holding something back all these years.
With no formal education, no real family, and no friends, Heloise has to remake her life—again. Disappearing will be the easy part. She's done it before and she can do it again. A new name and a new place aren't hard to come by if you know the right people. The trick will be living long enough to start a new life.

Thoughts: This was recommended to me by a librarian, based on some of my favorite authors. I'm glad I decided to take her up on it! I may have to check out some other books by this author when I have some empty space in my reading list. Enjoyed the suspense mixed with humor, and the great characters.

My rating: Four stars
Posted by Teresa Kander at 1:03 PM No comments:

Email ThisBlogThis!Share to TwitterShare to FacebookShare to Pinterest
Labels: and when she was good, books, fiction, humor, laura lippman, suspense

Synopsis: St. Vladimir’s Academy isn’t just any boarding school—it’s a hidden place where vampires are educated in the ways of magic and half-human teens train to protect them. Rose Hathaway is a Dhampir, a bodyguard for her best friend Lissa, a Moroi Vampire Princess. They’ve been on the run, but now they’re being dragged back to St. Vladimir’s—the very place where they’re most in danger. . . .

Rose and Lissa become enmeshed in forbidden romance, the Academy’s ruthless social scene, and unspeakable nighttime rituals. But they must be careful lest the Strigoi—the world’s fiercest and most dangerous vampires—make Lissa one of them forever.
Thoughts: This is one of my "read the book before watching the movie" reads for this year. I've read my share of vampire series in the past ten years or so, thanks to having had two teen girls during that time....and this one is, hands down, my favorite one to date. I already have the second book from the library, and plan to read all six--and I just hope the movie does it justice!

My rating: Five stars
Posted by Teresa Kander at 11:52 AM No comments:

Bless Me, Ultima, by Rudolfo Anaya


Synopsis: Stories filled with wonder and the haunting beauty of his culture have helped make Rudolfo Anaya the father of Chicano literature in English, and his tales fairly shimmer with the lyric richness of his prose. Acclaimed in both Spanish and English, Anaya is perhaps best loved for his classic bestseller ... Antonio Marez is six years old when Ultima comes to stay with his family in New Mexico. She is a curandera, one who cures with herbs and magic. Under her wise wing, Tony will test the bonds that tie him to his people, and discover himself in the pagan past, in his father's wisdom, and in his mother's Catholicism. And at each life turn there is Ultima, who delivered Tony into the world-and will nurture the birth of his soul.

Thoughts: I saw previews for the movie of this book on several videos we've rented recently, so I decided I wanted to read the book before watching the video. The book was a little difficult to read, a bit draggy for my taste. The story is a good one, though....a nice coming of age story from another culture.

My rating: Two stars
Posted by Teresa Kander at 3:51 PM No comments:

The Heist, by Janet Evanovich and Lee Goldberg

Synopsis: FBI Special Agent Kate O’Hare is known for her fierce dedication and discipline on the job, chasing down the world’s most wanted criminals and putting them behind bars. Her boss thinks she is tenacious and ambitious; her friends think she is tough, stubborn, and maybe even a bit obsessed. And while Kate has made quite a name for herself, for the past five years, the only name she’s cared about is Nicolas Fox—an international crook she wants in more ways than one.

Audacious, handsome, and dangerously charming, Nicolas Fox is a natural con man, notorious for running elaborate scams on very high-profile people. At first he did it for the money. Now, he does it for the thrill. He knows the FBI has been hot on his trail—particularly Kate O’Hare, who has been watching his every move. For Nick, there’s no greater rush than being pursued by a beautiful woman . . . even one who aims to lock him up. But just when it seems like Nicolas Fox has been captured for good, he pulls off his greatest con of all: he convinces the FBI to offer him a job, working side by side, with special agent Kate O’Hare.
Problem is, teaming up to stop a corrupt investment banker who’s hiding on a private island in Indonesia, is going to test O’Hare’s patience and Fox’s skill. Not to mention the skills of their rag-tag team of flamboyant actors, wanted wheelmen and Kate’s dad. High speed chases, pirates and Toblerone bars are all in a day’s work… if O’Hare and Fox don’t kill each other first.
Thoughts: I love this new series, even more than the Stephanie Plum books Evanovich writes. Kate is a lot less inept than Stephanie, and she doesn't have to rely on someone like Joe or Ranger to save her when she gets into a dangerous situation.  Nick isn't as mysterious as Ranger, but he's still a fascinating character, and the two of them have great chemistry together. Kate's dad is a great resource for their scams, and I have a feeling he'll be dropping in to help them out quite often. Can't wait for the next installment.

My rating: Five stars
Posted by Teresa Kander at 1:10 PM No comments: 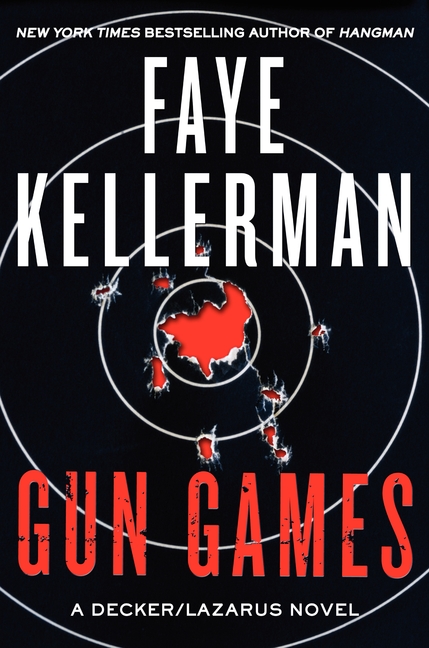 Synopsis: The nearly identical suicides of two students at a prestigious private school, both involving stolen handguns, pique the interest of LAPD Lieutenant Detective Pete Decker and his squad. But the focus here is less on Decker and his wife, Rina Lazarus, than on Gabe Whitman, the son of a friend who’s living with them temporarily. Gabe, a 15-year-old musical prodigy, also has street smarts learned from his mobster father, Chris Donatti, that stand him in good stead when he’s “crowded” and threatened by the clique called the B&W Mafia. Home-schooled Gabe also falls head-over-heels in love with 14-year-old Yasmine Nourmand. While the reciprocal relationship is grounded in love of music (plus raging hormones), it appears doomed by cultural and religious differences. Plot threads intertwine head-on in a violent confrontation, eventually tying up most loose ends extremely satisfactorily. The twentieth Decker/Lazarus novel shows Kellerman in fine form, taking on the au courant issue of bullying, in a slick, fast-moving mystery that should entice even those new to the series.

Thoughts: This is only my second Decker/Lazarus novel, and I am seriously hooked. Peter and Rina have great chemistry, and Gabe is a great character. Looking forward to seeing where his relationship with Yasmine will go in future novels. The last chapter of this one REALLY threw me for a loop, as I didn't see it coming at all....wondering if it will be addressed in the next book, or at some point in the future.

My rating: Five stars
Posted by Teresa Kander at 10:55 AM No comments:

The Illuminati, by Larry Burkett

Starting this blog back up again, hoping I can keep it going this year with no health related interruptions.  Here's the first book I've finished this year.

Synopsis: From before the time of Christ, there have been rumors of a secret society called The Illuminati...a vicious tribe of Druids with mystical, supernatural powers. Many saw them as demons or gods. Those who opposed them simply disappeared...or met an even worse fate.

Unknown to all but the very few, this group slowly infiltrated world organizations and financial institutions with a singular goal--to control the world's economic system.
Now fast-forward to the year 2020. The Illuminati has succeeded in placing one of their people in the office of the presidency of the United States. With the worldwide launch of a financial system known as Data-Net, they suddenly have the power to single out groups of people and control their money, fuel, and food supply. How do you escape an unknown enemy operating at the highest levels who can track your every move? And how do you defeat a society that practices ancient rituals and appears to have power beyond the grave?


The Illuminati is a futuristic thriller tied to ancient mysticism that will appeal to fans of The DaVinci Code and the Left Behind series. It will also leave readers wondering where fact ends and fiction begins.
Thoughts:  This is one of those books that really hit home for me. It was written years ago, it's based in the future, but some of it was like reading a current newspaper. We all need to keep our eyes open and be aware of what is going on around us.

My rating: Three stars
Posted by Teresa Kander at 8:32 AM No comments: