The Pharaoh's Daughter (Treasures Of The Nile #1) by Mesu Andrews 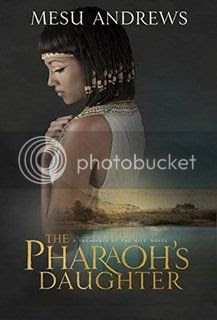 Review: I enjoy Biblical fiction which makes people and events of the Bible more real to me, and this story definitely fits the bill. This is the story of Moses, although it focuses more on his adopted mother and her story, giving us a different perspective from the one we read in the Bible.
The political intrigue of ancient Egypt plays out all around Anippe, involving her brother, her adopted parents, her husband, and everyone around them. We see Anippe grow from a pampered princess to a mature, responsible wife and mother--from a character I didn't really care for at first to one I grew to admire and respect.The next book in the series will focus on Miriam, the older sister of Moses, who we began to get to know in this book. I look forward to reading it as well.

Mesu Andrews is an author and speaker who has devoted herself to passionate study of Scripture. Harnessing her deep love for God’s Word, Andrews brings the biblical world alive for her audiences.Mesu and her husband, Roy, have two grown children and (Praise God!) a growing number of grandkids. They live in Washington, where Roy teaches at Multnomah University. They have a Rottweiler-pitbull named Bouzer who keeps Mesu company while she writes.
Posted by Teresa Kander at 9:38 AM

This sounds very good, Teresa. Thanks for the review as I'd not heard of this series before. :)
@dino0726 from
FictionZeal - Impartial, Straightforward Fiction Book Reviews