Onyx Webb: Book One (Episodes 1, 2, and 3) by Richard Fenton and Andrea Waltz 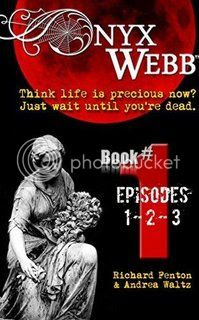 Synopsis: The Onyx Webb series follows the unusual life of Onyx Webb along with a central group of characters in various locations and times. The billionaire Mulvaney family, piano prodigy Juniper Cole and her brother Quinn, paranormal show hosts Cryer and Fudge, and a few others make up the core of the series. Written like a book version of a supernatural soap opera, each character’s story moves forward with most every episode. It may appear that the characters are entirely unrelated and yet episode by episode, the connections will become clearer. Like being an inch away from a spider web, with each book, the web will move further and further away revealing the full story of every character and most importantly, the stunning conclusion for Onyx Webb herself.
In Book One... It’s June, 1980 and piano prodigy, Juniper Cole is on the way to her senior prom. It’s January 2010, and Koda Mulvaney has blown through his 20 million dollar trust fund and is told by his father to return home and get to work. It’s August, 1904 and little Onyx Webb is on her way to the famous World’s Fair in St. Louis with her father, Catfish.

Review: I'm always a little leery of stories which come in "episodes," particularly after a couple of bad experiences. However, this one restored my faith in the concept. As the synopsis says, you start out thinking you are reading several individual stories from various time periods. But the more you read, the more interwoven the stories become--and not in a ridiculous, convoluted way.

All three main characters are realistically written and are very likable.  Several of them find themselves in life-threatening situations which will have you on the edge of your seat.

The plan for this series is for it to be a total of ten books, each with three episodes. That leaves me hoping that each story arc will have a multitude of adventures over those episodes, and that the end will totally surprise and confound us.

Rating: Five stars
Posted by Teresa Kander at 12:00 AM

Thanks again for taking a chance and reviewing! Book Two is even better, look forward to seeing what you think.