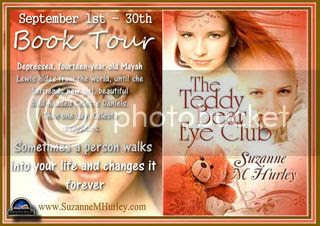 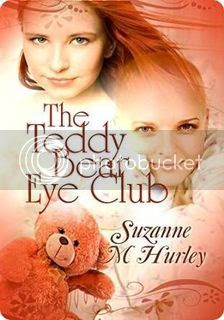 Synopsis: Sometimes a person walks into your life and changes it forever. That is exactly what happened to fourteen-year-old Mayah Lewis. Depressed, she hides from the world, until she meets new girl, beautiful bald-headed Celeste Daniels. Her love of life, inspires Mayah to live again. Everything begins looking up, until one day, Celeste disappears.

For More Information
The Teddy Bear Eye Club is available at Amazon.
Pick up your copy at Barnes & Noble.
Discuss this book at PUYB Virtual Book Club at Goodreads.

“Oh, what’s the point?”
Fourteen-year-old Mayah Lewis threw the tube of lipstick at the mirror. It bounced off the glass, hit the wall and rolled under a stall.
She didn’t care.
She was the only one there, having sneaked out of boring Biology class when the teacher was writing their homework on the board. Mostly hating the way she looked, she didn’t like doing her makeup when anyone was around and she wanted to look good—or at least relatively okay—cuz Joey Marshall was in her next class and she had a huge crush on him. This way she had the girls’ bathroom to herself, for at least a few minutes, since no one was supposed to be in there during instruction time, unless it was a dire emergency.
She stared at her face—ugly freckles creating swirls of uneven patterns across her nose and cheeks that no amount of foundation cream seemed to cover, beady blue eyes, two zits on her chin big enough to ski down and long, wiry red hair that curled as if having a life of its own. Blue eyes were usually an asset, except hers were a dull pale blue. Not attractive in the least.
Sigh.
She dumped the rest of her make-up in her backpack, flipped her mirror image the bird, shouting out, “Forget it. It’s hopeless.”
“No, it’s not.”
What the…?
She turned to watch beautiful, blond Kitty Richards come swinging around the corner, her golden curls flying behind her.
Mayah was stunned.
She’d looked when she came in and hadn’t seen anyone, but she’d forgotten about the wheelchair accessible stall way at the back, basically because no one ever went there. Or at least that was what she’d thought, since no one was in a wheelchair in the whole school. Obviously, that was where Kitty was, which was kinda weird. She was not handicapped in the least—or at least not physically. Now, personality-wise, maybe a bit, or at least she always came across stuck-up as anything.
Crap.
Mayah had no luck whatsoever.
And why, oh why, had she picked up Isobel’s habit of talking out loud when alone? It was bad enough to agonize about her face, but to have a witness was horrifying. And especially Kitty, the most gorgeous girl in grade nine, if not the whole school. Yep, she was stereotypically tall and thin with one of those perfect complexions. No way would pimples ever take up residence there—she was a masterpiece. And to think she was smiling, looking real friendly-like.
Yeah, right.
Kitty’d never spoken to her before. She only associated with the ‘cool’ crowd, not paying any attention to the rest of the so-called losers. Today must be just a pity call, like mock the ugly girl by building her up, then ripping her down later—probably in front of a crowd of students all laughing at her.
Embarrassed, wanting to die, Mayah ignored her and tore out of the room, down the hall to a door at the back of the auditorium. She pulled out her key, inserted it, tugged it open and ran up the stairs to the projection room. This was her hideaway, for no one ever came here during the day and it was only used when there were assemblies or plays.
Opening up one of the cupboards, she dug around, lifting up a slew of brand new light bulbs that’d been stored there.
Good.
Her emergency box of chocolate chip cookies was still there.
Grabbing a few, she hid them again and plopped down on one of the old raggedy chairs, apparently purchased at a garage sale, or so the story went. Someone had dragged them up the stairs to become a permanent fixture in the small room. Ugly but comfortable, this was her refuge several times a day.
Luckily, she’d discovered it when she’d joined the sound crew at the beginning of the year. Of course, she’d only gone to two meetings before she’d realized everyone was a senior and no one was interested in the new freshman girl’s help. So she’d quit. But not before she’d secured a duplicate key, loaned to her by the head member, namely because she was the only one who had volunteered to come in extra early one morning to set up a microphone for a ‘before school’ drama rehearsal. She’d just never returned it and fortunately, he hadn’t noticed. Rumor had it that he was in possession of several illegal copies, so guess missing one of them flew under the radar. Sure that was sneaky and she’d be in big trouble if the principal ever found out, but for now, it was like her own little office—a place to hide. And that was what she was into these days—wanting to hide as much as possible, from everyone and everything.

Review: This is a story of teens struggling with low self-esteem: Mayah believes that her adopted parents have lied to her, and has issues with being adopted; Kitty is being molded into "perfection," turned into someone she isn't; Freddy, the good student and star athlete, is perceived as stuck up, and Danni hates her weight. Then Celeste starts school with them: a cancer survivor comfortable in her own skin (including her bald head), and full of happiness.
Together they form The Teddy Bear Eye Club (I love the reason behind the name, which I won't give away here), and are there to support and encourage one another through their trials and tribulations. In the end, you will find yourself smiling at how things are wrapped up. The author tackles some tough topics in this book, and still manages to inject humor into the story. (Spunky is good for a few laughs!) The characters are written so realistically that you would expect to find them in your local high school.I would recommend this to all teens, as well as all adults with teens in their lives. It will stick with you for years to come.

All her life, Suzanne M. Hurley had a secret.
She loved to write, about anything and everything.
Suzanne Hurley was born in Peterborough, Ontario, where she spent most of her childhood immersed in The Hardy Boys and Agatha Christie novels. Secretly she wrote stories about murders and dead bodies and detectives who painstakingly uncovered the truth.She attended Carleton University in Ottawa, Ontario where she continued devouring every book she could get her hands on in the mystery genre, branching out into women's fiction. Secretly, she wrote pages and pages about women facing challenges and overcoming them. As a youth minster in a parish and a chaplain in a high school, a ministry that she loved with all her heart, she began to write about teens’ struggles, challenges and ways to overcome problems. Eventually, combining her love of mysteries, women’s fiction and teenagers, her secret burst forth in a series of novels that embraced her passions. To date, Suzanne has written eleven novels. She is currently writing the sixth book in her mystery series, has written three women’s fiction novels and two young adult books.
No more secrets for her. She loves every minute of it.
Her latest young adult novel is The Teddy Bear Eye Club.
For More Information
Visit Suzanne M. Hurley’s website.
Connect with Suzanne on Facebook and Twitter.
Find out more about Suzanne at Goodreads.
Contact Suzanne.

Just wanted to thank you so much for your wonderful review. It was very thoughtful and very much appreciated. Thank you so much. And thank you, also, for taking the time to read my book.

It was my pleasure! :D