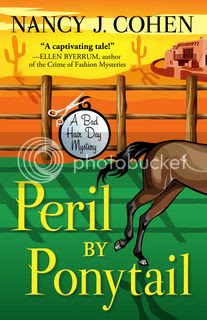 Synopsis: Marla and Dalton’s honeymoon at an Arizona dude ranch veers from dangerous to downright deadly faster than a horse headed to the corral. With her husband’s uncle–the resort’s owner–on the suspect list for murder, Marla races to prove his innocence. She hopes her blind trust isn’t misplaced, especially when she learns their relative has secrets he’d rather keep buried. As the bodies pile up, she digs deep to find the killer. With her new family in jeopardy, she’d better figure out who’s adding to the spirits haunting a nearby ghost town before someone she loves is hurt. Saddle up for Marla’s latest adventure in the Wild West where a Bad Hair Day is the least of her worries.

Review: Having spent many years listening to my husband talk about Arizona (he lived there for 20 yrs), reading the descriptions of that area in this book was very interesting for me. Not only that, but there was also a bit of Arizona history included as well.

The murder mystery in this book was very well done. The ending was a complete surprise, which is something I really enjoy in a mystery. There are quite a few characters in this book, but that doesn't seem to bog down the flow of things at all.

I enjoy the romantic relationship of Marla and Dalton, even though solving a murder doesn't seem much of a way to spend your honeymoon.  We meet quite a few members of Dalton's extended family in Arizona, and some of them are characters in every sense of the word.

This is a great read for a lazy weekend. Even though it is the twelfth book in the series, you don't need to have read the entire series to follow the story. 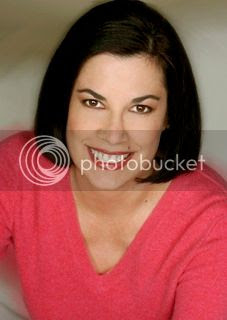 Nancy J. Cohen writes the humorous Bad Hair Day mystery series featuring hairdresser Marla Shore, who solves crimes with wit and style under the sultry Florida sun. Several of these titles have made the IMBA bestseller list. Nancy is also the author of Writing the Cozy Mystery, a valuable instructional guide for writers on how to write a winning whodunit. Her imaginative romances have proven popular with fans as well. Her titles in this genre have won the HOLT Medallion and Best Book in Romantic SciFi/Fantasy at The Romance Reviews. Active in the writing community and a featured speaker at libraries and conferences, Nancy is listed in Contemporary Authors, Poets & Writers, and Who’s Who in U.S. Writers, Editors, & Poets. Currently, she is serving as President of Florida Chapter Mystery Writers of America. When not busy writing, Nancy enjoys reading, fine dining, cruising and outlet shopping.


a Rafflecopter giveaway
Posted by Teresa Kander at 12:00 AM

Thank you for the great review!

Thanks to the Book Babble for introducing me to Nancy. Good job...both of you.