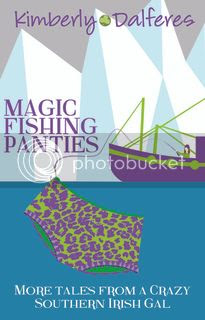 Synopsis: Have you taken to blaming the little people for stealing all the things you can’t find, like the damn Chico’s gift card you are 100% sure you left on the dresser? When you take off your bra, is it as if an airbag has deployed? Have you more than once started a sentence with the phrase “Back when I was in school…”? If you answered yes to any of these questions, welcome to the middle-aged cheap seats.
Magic Fishing Panties is the follow-up to Dalferes’ debut book I Was in Love With a Short Man Once. This collection of humorous tales offers new perspective from the self-proclaimed crazy Southern Irish gal and recent inductee into “Club 50.” Rather than wallow in the self-pity often induced by sagging jaw lines, empty nests, and menopause, the author offers colorful depictions of life in the middle. You will find yourself contemplating:• How would you react to being in public during an earthquake? Oh, and you’re naked.• The wedding starts in five minutes and your best friend needs to pump her breast milk, but all the bathrooms are occupied. Where should she go to quickly resolve her situation?• You are depressed and alone on your 39th birthday. What do you do? Hint: tattoo anyone?You’ll come to know Kimba as a true gal pal, someone who will gladly lend you her size 11 black boots, favorite red coat, and anything else you might need to rule the world – with the exception of her magic fishing panties. Because letting you borrow those would be a little weird, don’t ya think?

Review: It's been a while since I read a book which had me laughing until I cried--but this is definitely one of those books. So many of the author's stories are easy for women of "a certain age" to identify with, as we've been there right along with her.

The author does touch on subjects such as racism and sexism, but she has managed to do so with class and grace. She is an amazing writer, and I look forward to more of her humor in the future.

I received a copy of this book from the author in exchange for an honest review, and all thoughts and opinions are entirely my own. 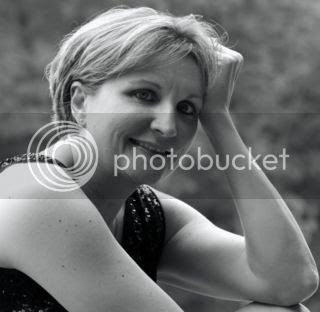 Kimberly “Kimba” Dalferes is a native Floridian, but currently pretends to be a Virginian. She is an accomplished king salmon slayer, estate sale junkie, and sometimes writes books. Her first book, I Was In Love With a Short Man Once, was published in 2011, with a 2nd edition released in 2015 by Booktrope Publishing. She recently published her second book, Magic Fishing Panties, also with Booktrope Publishing. Her stories have been featured in diverse publications including Voices from Smith Mountain Lake (an anthology published in 2013 by the Smith Mountain Arts Council), The Roanoke Times, Hippocampus Magazine, Marco Polo Arts Magazine, The Business of Being An Author, The Erma Bombeck Writers’ Workshop, Generation Fabulous, Better After Fifty, Laugh Lines-Finding Your Funny, and Midlife Boulevard. She is also a columnist–her humor column Dock Tale Hour appears regularly in Laker Magazine (an affiliate of Times-World LLC).The author happily serves on the Board of Governors for the Virginia Writers Club (VWC). She is a member of the Orangeberry Book Tours Hall of Fame (2012), is a featured writer in The Authors Show, 50 Great Writers You Should Be Reading (2012), and won gold in the AuthorsDB 2013 Book Cover Contest. She has also been recognized for her nonfiction writing as the winner of the 2014 Golden Nib Award; VWC’s highest honor.Dalferes divides her time between Fairfax and Smith Mountain Lake, Virginia with husband Greg, Bonz the cat, and occasionally her son Jimmy, when he is home from college. She is also often found hanging out in The Middle-Aged Cheap Seats–her blog. She continues to sing hopelessly off-key and waits patiently for that phone call from George Clooney.