Inside the Book:
Title: Jericho 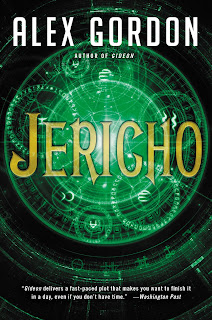 For readers of Deborah Harkness, J.D. Horn, Lev Grossman, and any supernatural thriller, a young witch must risk death and damnation to defeat a powerful ancient evil in Alex Gordon's follow-up to the masterful debut Gideon.

In unearthing her father’s secret past, Lauren Reardon discovered a shocking truth about herself. She is a Child of Endor, a sect of witches who believe they are the guardians of the “thin places”—areas across the globe where evil can seep through the divide between the worlds separating the living and the restless dead. At any time, she can be called upon to close one of these breaches and prevent demons from infiltrating our realm. When Lauren has a disturbing vision of an Oregon forest, she is drawn back to the familiar woods of the misty Pacific Northwest to investigate.

Locals had long whispered about an abandoned logging camp known as Jericho—of the strange disappearances and eerie sounds heard in the woods deep in the night. But these ghost stories only hint at the true evil lurking within the camp’s dilapidated buildings, a primeval malevolence far more terrifying than Lauren’s darkest imaginings. And now, Lauren must face this evil, even if it takes her life . . . even if it costs her soul.

Review:  I absolutely LOVED the first book in this series, Gideon, so I could hardly wait to start reading this one. Unfortunately, it just didn't grab me in the same way.  There was almost no paranormal action for a large part of the book, which is what I was really looking for in the plot. The antagonist didn't really make a lot of sense to me, as we didn't seem to get much background on how she got to be in the situation she was in.

I still love the character of Lauren, but I hope her next adventure will be more like her first and less like this one. I wanted to be scared of the antagonist, as I was in Gideon, but the author just never got me there this time.

Alex Gordon resides in the Midwest. When she isn’t working, she enjoys watching sports and old movies, running, and playing with her dogs. She dreams of someday adding the Pacific Northwest to the list of regions where she has lived.