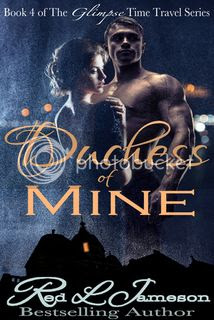 Synopsis: Seventeenth century Highlander Michael Cameron should have been prepared for his journey to Philadelphia in 1895. After all, it wasn't the first time he'd been kidnapped by two mischievous muses, who delighted in taking him by surprise and shuffling him off to far-flung lands and eras. But nothing could have readied him for angelic Gabriella Murray, the Duchess of Northampton. She’s a beautiful, lovely, gorgeous—did he mention just how bonny Gabby is?—duchess, and he’s a lowly Scot. How is he going to solve the missing children case the muses have given him with such a distracting woman?
Becoming friends with a muse, Gabby feels her life has taken a turn for the fantastic, which suits her fine, since being a duchess is gray and depressing. So, when that muse asks her to go on an adventure imitating her idol, Sherlock Holmes, of course she says yes. However, Michael, who is to play her Dr. Watson, is quite possibly the most handsome and intriguing Highlander she’s ever encountered. Lord, Sherlock never had to contend with an overwhelming desire for Watson. How can she concentrate on the case when he’s more fun than she’s ever had before?
As Michael and Gabby hunt through the mean streets of cities such as Chicago and Detroit, they dive deeper into a world of danger and violence. Fighting against their growing attraction to each other, they race against time to find the children, knowing that with every corner they turn, they might be too late.

Thoughts: Another adventure with a Cameron brother, thanks to three muses: Clio, Erato and Melpomene. Michael is introduced to Gabriella, and they are informed they have a mission to assist Det. Frank Geyer in solving a missing children case...but they are NOT to let him know they are assisting. Michael is also told that, unlike his brothers, he is not paired with a woman who is his glimpse (his true love).
The mixture of fact and fiction is seamless and very believable. I was able to put myself in the various cities in 1895, right alongside the characters. Although some mention is made of events from the previous three books, and several characters from them are mentioned or make appearances, this story is capable of being read as a stand alone novel. Michael and Gabby are an adorable couple, and seeing their relationship grow throughout the story is just as engaging as seeing the mystery play out. I especially enjoy seeing how they help each other develop better self-images after the difficult lives each has led up to this point.If you like mysteries, time travel and/or romance, this book (and this series) is a must read.

(Personal note: I was pleasantly surprised and honored to find myself listed, along with other beta readers, in the acknowledgments!)**I received a copy of this book from the author in exchange for an honest review. All thoughts and opinions are entirely my own.**

My rating:  Four stars
Posted by Teresa Kander at 8:08 AM