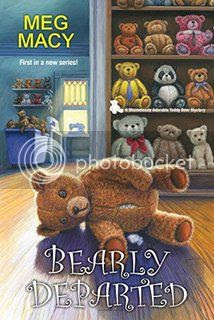 Synopsis: The Silver Bear Shop and Factory might be the cutest place around, but there s nothing warm and fuzzy about murder . . .
As manager of the family teddy bear shop and factory, thirty-one-year-old Sasha Silverman leads a charmed life. Well, except for the part about being a single divorcee with a ticking biological clock in small-town Silver Hollow. And that s just kid's stuff compared to Will Taylor, the sales rep who's set on making drastic changes to the business her parents built from scratch with or without Sasha s approval . . . But before Will digs his claws in, someone pulls the stuffing out of his plan . . . and leaves his dead body inside the factory. Reeling from shock, Sasha s hit with more bad news police suspect her hot-tempered Uncle Ross may have murdered him. Sasha knows her uncle would never do such a thing, and she's launching her own little investigation to expose the truth. As she tracks Will's biggest rivals and enemies for clues, Sasha can't get too comfy or she'll become the next plaything for a killer.

Review: As someone who collects teddy bears, and has for years, the idea of this series was near and dear to my heart. From the moment the author announced her plans to write it, I have been impatiently waiting for the arrival of this book. When the cover was revealed, I was even more impressed--who can resist all of those adorable bears?

The author delves into the complicated family relationships of the Silverman family--Sasha, her parents, her sister, and her uncle, as well as her ex-husband. She also introduces us to many of the other business owners/businesses in Silver Hollow, which sounds like the type of place I would love to visit.

The murder mystery is very well developed and keeps readers guessing all the way through. The reveal of the murderer wasn't a total shock to me, but the amount of premeditation that went into it was.

While Sasha is not involved in a romantic relationship in this book, I do have a hope that she will be in future stories (not going to say with whom--read the book and see what you think!)

I sincerely hope this series will continue for MANY years to come!!

a Rafflecopter giveaway
Posted by Teresa Kander at 12:30 AM