Knock on Wood
(A Superstition Mystery) 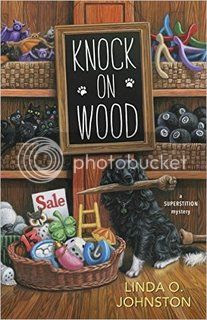 Synopsis: Rory Chasen, now the manager of the Lucky Dog Boutique in Destiny, California, is delighted when her closest friend Gemma Grayfield, a librarian, comes for a visit. But Gemma arrives early and seems upset. It turns out she has broken up with her boyfriend, Frank Shorester. Gemma is soon hired to manage the Broken Mirror Bookstore. Frank follows her to Destiny, where Gemma is also wooed by two local men. Rory may be a little jealous—until one of those men, Deputy Mayor Bevin Dermot, turns up dead. Bevin is known for knocking on wood for everything, but despite Destiny being all about superstitions that did not save his life.

Rory tries to help Gemma clear herself of being a murder suspect, even counting on her lucky black and white dog Pluckie to help. But is Gemma guilty of murder—or of just having a run of bad luck?
Review: I haven't read the first book in this series, but I am enthralled by the idea of a town which takes superstitions so seriously that most people's livelihood revolves around them. Ms. Johnston has obviously put a lot of time into her research of superstitions and items which bring good or bad luck. There are several items mentioned in this book which I had never heard of as bringing luck.

The mystery is very well written and keeps the reader guessing as to whodunit until the final reveal. You make think that you know, but there are twists and turns that you will never see coming. I enjoyed getting to know Rory and Gemma, and look forward to learning more about them in future books.

Rating: Four stars
About the author 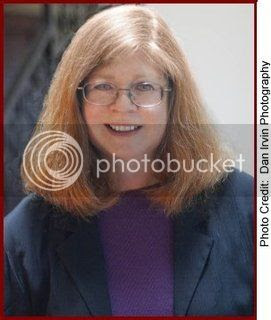 and won the Robert L. Fish Memorial Award for Best First Mystery Short Story of the year.   Since then, Linda, a former lawyer who is now a full-time writer, has published more short stories, novellas, and 38 romance and mystery novels, including the Pet Rescue Mystery Series

, a spinoff from her Kendra Ballantyne, Pet-Sitter mysteries

for Berkley Prime Crime, and Harlequin Romantic Suspense as well as the Alpha Force paranormal romance miniseries for Harlequin Nocturne.  She additionally writes the Superstition Mysteries for Midnight Ink.
Her latest cozy mystery series, the Barkery and Biscuits Mysteries also from Midnight Ink, started off in May  2015 with BITE THE BISCUIT

and KNOCK ON WOOD

I would love to read this one. The town sounds like it would be fun to visit.

I would love to start this series. I've always liked everything that I read by her.

Enjoyed the review. I'd like to visit this town, too! Thanks for the chance to win!

Enjoyed the review. I'd like to visit this town, too! Thanks for the chance to win!